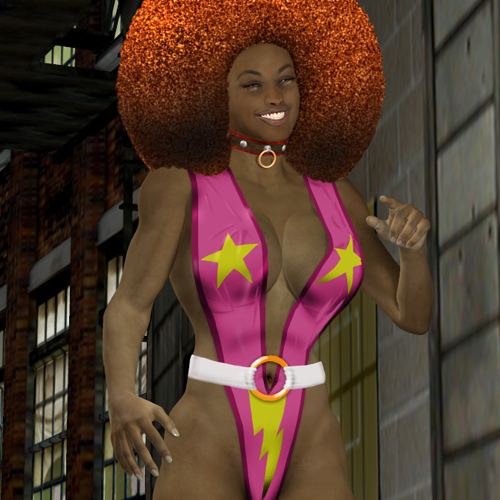 Then there’s Helga Von Toten a Nazi from the Fourth Reich of the future. She’s sometimes an enemy and sometimes a frenemy.

Depending on what suits her purpose best. She’s a duplicitous bitch!

Oh and this time around I get to have a boyfriend!

Wow! But I thought that anybody who has sex with you is reduced to their basic atoms? Remember what happened to the space prick?

The Space-Prick was a prick using his “Nympho Ray” as a date rape device. He got what was coming to him. Lust and predation reduces you to your basic atoms, at least when you try that bull with me. I’m wired like that.

So are you saying that your boyfriend doesn’t lust for you? You two don’t do the, you know…deep, dark, freaky, nasty? The Wild thang, the horizontal mambo, the beast with two backs, the…

(chuckles, interrupting) You have a way you know? Well yes he does lust for me but it’s more than that.

Now you’re being coy with me. So there’s a sex scene between the two of you?

You’ll just have to wait and find out like everybody else when the book comes out.

Well can you tell us his name at least?

I can do that much. His name is Duke Clenchfist and he’s the kind of man that can handle a Superbitch like me.

Uh oh. That sounds a bit kinky! Who is this guy…a villainous gynecologist?

You are definitely warped Bucky!

Warped like wet wood if you catch my drift? You’re a parahuman. You’re sexually evolved beyond the rest of us. Sex with you is too intense to survive it.

Doctor Strangfuch is a lab rat with some crazy ideas about human sexuality, and that is exactly what interests him about me.

This is sizing up to be one hell of an adventure, any one else?

In one of the stories in the trilogy titled “Hard Junk”, I have to go toe to toe with a giant angry robot called Clank Tankerous. There’s a lot more stuff going on but I can’t talk about it without giving away too much and spoiling the ride.

Wow, this has been a great interview so far. I guess we’ll have to continue in part two because I guess you have to get back to work.

We can pick things up when I get done with this next scene.